One of my earliest memories in life is holding a Burmese Python at a pet store inside a mall in Sherman, TX, near the town I was born and raised, in the late 1980s. I was around 4 or 5 years old. That feeling has never left me. I spent the rest of my childhood in creeks catching reptiles and amphibians and finding the occasional skull.

As a teenager I was already well aware that my brain was not working the same as everyone else around me, but it wasn’t until my 30’s that I was diagnosed with Aspergers Syndrome. I’m introverted and fairly awkward in normal conversation with people because I usually feel uncomfortable. This is because I obsess over subjects to an almost debilitating point. I’m usually trying to listen and not think about whatever I’m obsessing about, but it’s hard. I can’t sleep until I know everything possible about whatever it is I’m onto at the moment. It creates constant anxiety and it wasn’t until my early 20’s that I learned how to turn it off. Work. I have to be working towards a goal at all times. It’s the only way I can function. 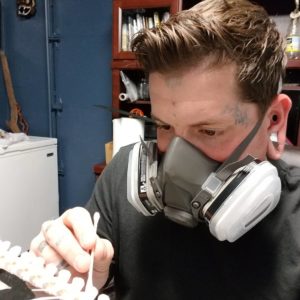 Learning that I had Aspergers Syndrome allowed me to understand that I have no control over what I become obsessed with. Some obsessions stay for life and others don’t. This is also why I have developed so many skills over my life. This explained so much and helped me understand my brain and how to work with it instead of fighting it. This really caused issues in school. Public school is designed to make you a round peg that fits in a round hole. I felt like I was in prison every day and I have absolutely no fond memories of my time in school. As soon as I turned 16 I dropped out and went on my way. I have never felt regret for this decision.

I became a professional body piercer at 18 and sought out a tattoo apprenticeship at 19. At 25 I opened my first studio, which I still own to this day. At 34 I opened my second one. I have not pierced or tattooed in years and just run my businesses and hobbies now.

During my life I have worked towards living my own way and doing what I want when I want. I married my dream girl and have a wonderful daughter. I work with my favorite species, built my childhood dream reptile room, and I don’t have a boss. That last part is mandatory for the way my brain works.

It’s not even that I want to create the art, it’s more like I have to. I’m very compulsive and usually working in other areas of my life like businesses, family, reptiles, vehicles, and traveling, but if an idea accidently creeps up on me I tend to obsess and toss & turn at night until it is finished. That’s why I’m nowhere near as prolific as other similar artist.

During that time period, and since I was 9 years old, I have always had pet reptiles.  I have worked with a broad range of species from Anoles as a kid to Black-headed Pythons as an adult.

My collection has grown into its current state based purely on my own interest. I have almost no mutations, but I’m also not a purist. I just prefer the normal phenotype better. The first species I bred was my favorite species to this day, Eastern Indigos (Drymarchon couperi). I still breed them and other species.

I have had a small skull and oddities collection for almost two decades. But in 2016 I accidentally began obsessing with how the process works. Within weeks I was building a dermestarium and starting on my first skull. This obsession didn’t calm down for about 2 years. I learned how to process bones using museum grade methods and how to build full skeletons. Screwing up along the way lead to a large amount of spare bones. This lead to building art.

As weird as people seem to find this activity I enjoy, and no matter what crazy chain of events they seem to think they are going to hear when asking, there just really isn’t a lot to why and how I started this. I like it. I wanted to. So I did.

I use Dermestid Beetles and museum/university designed methods for all bone preservation. Everything is degreased and whitened properly before assembly.

So there it is, the uneventful, boring story of how, why, and what.

I don’t have time to teach people or answer a flood of questions as what I do is complicated and impossible to teach via email or msgs. However I do have tutorials available here.